On January 27, about 300 Survivors, witnesses of the history of Auschwitz, have met in front of the Death Gate of the former Birkenau camp in order to commemorate the 70th anniversary of the liberation of the German Nazi concentration and extermination camp.

They were accompanied by the leaders of over 40 countries who listened to their words. Among the leaders, there were the crowned heads, presidents, prime ministers, ministers and diplomats as well as representatives of numerous international institutions, community organizations, clergymen, employees of museums and memorials devoted to this subject as well as – via the media – all those wishing to honor the memory of the victims of the German Nazis.

Guardians of the memory of Auschwitz

The guests were welcomed by Bronislaw Komorowski, the President of the Republic of Poland, who has extended his honorary patronage over the events commemorating the anniversary. He addressed the former prisoners with the words: "Everyone of you is the guardian of the memory of Auschwitz. Every Survivor who was saved from the camp, the hell of hate and violence. You are the most important guests of the event today. Being the guardian of memory is not only about protecting the memory of the crime itself, but also about reflection of its sources which lay in people, nations, ideologies and policy of states. This is memory about totalitarianisms, xenophobia, antisemitism which were the foundations of the 20th century collapse of our civilizations. Poles are also the guardians of memory in a special way, because in the occupied Poland two totalitarianisms started to implement their genocidal plan at the same time".

"It is our duty, the duty of Europe and the world to remember because of those who suffered here, because of You, who survived the camp horrors. But it is also our obligation to remember for ourselves, for our future", said President Komorowski.

The evil of Auschwitz flickers

On the day of the anniversary, the most important speeches were delivered by former prisoners of the camp: Halina Birenbaum, Kazimierz Albin and Roman Kent. 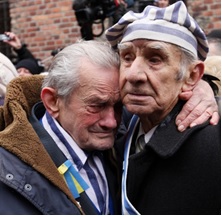 “Countless times, I was dying, freezing with fear, pain, stress of selection, watching the torment and agony of my fellow female prisoners, my neighbors from overcrowded bunks, who shared the same fate in this indescribable, endless horror, where every minute was a century and an imploring question: will there be another one? Once during a long standing roll call, when the sun was shining and they were not beating us, a pathetic thought flashed across my mind, that they will finally burn me in this fire from the crematorium behind the wires and I will never experience the kiss of love like those that I had been reading about in books in the ghetto in Warsaw before the Auschwitz era… At the age of fourteen, one has those important, supposedly deathbed, ideas and worries”, said Halina Birenbaum, Israeli poet born in Warsaw, deported to Auschwitz at the age of 14.

“The evil of Auschwitz, unacknowledged, unfathomable, flickers peacefully and is reborn in the growing terror, antisemitism, racism, up to the public, unpunished beheading of people in front of the eyes of the whole world just because they are different. I answer myself – often stupefied because of what is now happening around us – that if Auschwitz could have come into being and functioned legally and unpunishedly for years, then the worst is possible. And one cannot be surprised with anything, but one must recognize early enough, explicitly oppose and hedge up the way to further tragedies, lawlessness and crimes”, she emphasized.

“The Auschwitz Birkenau Museum has a great contribution to this crucial issue of understanding and warning – its management, numerous dedicated employees, who during all these years of extremely difficult, strenuous work store testimonies, documents, remains of documents, record the memories of the victims, eyewitnesses, pass on to millions of visitors from all around the world the knowledge about the people and the life in long-term extreme situations on the verge of death: about human strength of will, the power of friendship, hope and perseverance in the hardest living conditions”, said Halina Birenbaum.

A struggle to preserve human dignity

Kazimierz Albin, who was deported to the Auschwitz camp on June 14, 1940 in the first group of Polish political prisoners, recalled that the prisoners, in spite of great risk, were fighting in the camp for preserving their humanity. “From the very first day, there is an ongoing struggle for biological survival, for delivering as many lives as possible from death, for preserving human dignity.

In the camp and around it, organized resistance movement was also functioning, led by the Home Army, the Polish Socialist Party and Peasants’ Battalions. The sacrifice of Poles from the zone adjoining the camp was priceless”, he said.

“Escapes from the camp had become an effective way of self-defense. The prisoners were escaping in order to take away the documents of SS crimes, to tell the world the truth about the camp and to fight with the occupant with guns in their hands. Few experienced this happiness. At the sound of the camp siren, special SS pursuit units, supported by armed patrols of German Bauers in place of the expelled Poles, were setting off to search the escapees. Sharp wailing of the siren was filling the prisoners with fear because of repressions, but it was also a sign of hope that the world will learn about Nazi crimes in KL Auschwitz-Birkenau. I heard the siren myself for the last time late in the evening on February 27, 1943, when – after my escape from Auschwitz – I was crossing the Sola river among ice floe”, he added.

“This sound still lies in my subconsciousness. I paid a heavy price for my escape from the camp. As a result of repressions, Sicherheitsdienst arrested my sister and my mother, who was deported to KL Auschwitz-Birkenau, and then to Ravensbrück. Fortunately, they survived this ordeal”, Kazimierz Albin finished his speech.

Roman Kent, who was deported by the Germans to Auschwitz from the Litzmannstadt ghetto, said that people often ask him how much time he spent in the camp. “My answer is I do not know. What I do know is that a minute in Auschwitz was like an entire day, a day was like a year, and a month an eternity.  How many eternities can one person have in a single lifetime – I don’t know the answer to that either”, he said.

“It is our mutual obligation, that of survivors and national leaders, to instill in the current and future generations the understanding of what happens when virulent prejudice and hatred are allowed to flourish. We must all teach our children tolerance and understanding at home and in school.  For tolerance cannot be assumed …. it must be taught.  And we must make it clear that hate is never right and love is never wrong!”, he added.

In his speech Roman Kent, who now lives in the United States, included his message for the future: “And yet, in view of the current participation and awareness of so many world leaders, there is visible proof of compassion and involvement instead of indifference.  This is progress …. it is now up to the leaders of tomorrow.  But there remains so much more to be done.  We all must be involved and stay involved .... no one should ever be just a spectator!  I feel so strongly about this point that if I had the power, I would add an Eleventh Commandment to the universally accepted Ten Commandments: “You should never, never be a bystander.”, emphasized Roman Kent.

The silence of the world leads to Auschwitz

During the ceremony commemorating the 70th anniversary of the liberation of Auschwitz, among the speakers there was also Ronald S. Lauder representing “Pillars of Remembrance”, individual donors who supported the Auschwitz-Birkenau Foundation.

“There are representatives from 40 nations here with us today and we, the Jewish people, are so grateful that you have joined us. You are good, decent people. But because of where we are and what this place means your governments must stand up to this new wave of hatred. Schools must teach tolerance of all people. Houses of worship should be places of love, understanding, and healing; they should not be telling their people to kill in the name of God.", he said.

“All countries must make hate a crime. Any country that openly brags about the annihilation of another country should be excluded from the family of nations. Every government must have absolutely zero tolerance for hate of any kind. Unless this is checked right now, it will be too late. We still have a chance to stop this, but if every government does not act quickly, then the tragedy of this terrible place will darken our world again.

Do not let this happen again.”, Ronald Lauder emphasized.

"Never again" is a personal decision

Dr. Piotr M. A. Cywinski, Director of the Auschwitz Memorial, thanked all the participants of the ceremony for their presence during this special day. In his speech he also included his message for the anniversary. “Auschwitz is not a source of strength. If anyone came here to feel strength, wisdom, catharsis - they are wrong. Auschwitz is darkness, destruction, annihilation. This is why it takes on the form of a warning, a horrid warning. We still cannot cope with Auschwitz as we cannot save [human] face, at the same time consenting to hatred, contempt, antisemitism, and first and foremost our daily indifference. This is why Auschwitz is so frightening. Today, it no longer awakens the demons, it awakens the conscience. And this conscience - accuses each and everyone of us”, he said.

After the speeches, rabbis and clergymen of various Christian denominations said the prayers: Kaddish, El Male Rachamim, Eternal Rest and God of the Spirits.

Moreover, premiere screening of the documentary “Auschwitz”, prepared by the Museum in cooperation with the Shoah Foundation from Los Angeles, took place during the ceremony. The film, directed by James Moll, was produced by Steven Spielberg.

At the end of the commemoration event, delegations of former prisoners, representatives of state delegations, “Pillars of Remembrance” and guardians of the Memorial placed candles on the monument in Birkenau commemorating all victims of the camp.

Until the liberation of the camp by the Red Army, German Nazis murdered in Auschwitz about 1.1 million people; mostly Jews, but also Poles, Roma, Soviet prisoners of war and people of other nationalities. Today Auschwitz is the symbol of the Holocaust and of the atrocities of World War II. In 2005 the United Nations designated the 27th of January the International Holocaust Remembrance Day.