PHILADELPHIA (April 24, 2015) – Saint Joseph’s University has formally commissioned local artist Joshua Koffman to craft an original sculpture entitled, “Synagoga and Ecclesia in Our Time.” To be situated prominently on the campus near the Chapel of Saint Joseph–Michael J. Smith, S.J. Memorial, Koffman’s preliminary design has been completed and work on the final statue has begun. 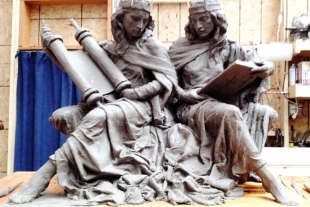 The sculpture is part of the University's celebration with the Philadelphia Jewish community of the 50th   anniversary of the Second Vatican Council declaration, Nostra Aetate (Latin for its opening words, “In Our Time”). That 1965 statement repudiated centuries of Christian claims that Jews were blind enemies of God whose spiritual life was obsolete. The document called instead for friendship and dialogue between Catholics and Jews. Shortly after, what was then Saint Joseph’s College became the first American Catholic college to respond to this appeal by establishing the Institute for Jewish-Catholic Relations. The sculpture will also memorialize the Institute’s work and mission.

On numerous medieval cathedrals statues of the female allegorical figures of Church (Ecclesia) and Synagogue (Synagoga) portrayed the triumph of Christianity over Judaism. Ecclesia is crowned, majestic and victorious. Synagoga is defeated and blindfolded, her crown fallen at her feet.

"In 1965, Nostra Aetate rejected such images, declaring that Jews are beloved by an ever-faithful God whose promises are irrevocable," says University President, C. Kevin Gillespie, S.J. ’72.  "The statue of 'Synagoga and Ecclesia in Our Time' will portray Jews and Christians using the medieval figures in a strikingly different way to express Catholic teaching today."

According to Institute Director Philip A. Cunningham, Ph.D., the new sculpture will employ Synagoga and Ecclesia rendered with nobility and grace, to bring to life the words of Pope Francis: “Dialogue and friendship with the Jewish people are part of the life of Jesus’ disciples. There exists between us a rich complementarity that allows us to read the texts of the Hebrew Scriptures together and to help one another mine the riches of God’s word.” The work will depict the figures enjoying studying each other’s sacred texts together.

“The sculpture will vividly convey what Pope Francis has called the ‘journey of friendship’ that Jews and Catholics have experienced in the past five decades,” observes Jewish Studies professor and Institute Assistant Director, Adam Gregerman, Ph.D. “We are looking forward to area Jews and Catholics coming together to celebrate the remarkable rapprochement that is occurring.”

Artist Joshua Koffman is a Philadelphia-based sculptor known for his expressive and dramatic large-scale bronze sculptures. The recipient of many distinguished awards including the Alex J. Ettl Grant, the John Cavanaugh Memorial Prize, and First Place in the Grand Central Academy’s Sculpture Competition, he pursued formal art education at the University of California, Santa Cruz and at the Pennsylvania Academy of the Fine Arts, where he currently teaches.

“I am certainly looking forward to creating a sculpture that will communicate an incredibly unique and important message that will be central to such an extraordinary occasion as this historic anniversary,” Koffman says.

The statue of “Ecclesia and Synagoga in Our Time” will be dedicated this coming fall. Further details will be announced nearer the date.

For more information, visit the website of the Institute for Jewish-Catholic Relations of Saint Joseph's University at http://sju.edu/int/academics/centers/ijcr/.