A Conversation Stimulus from the Five Regional Churches of Baden, Hesse and Nassau, Palatinate, Rhineland, and Westphalia, Germany.

The first drafts emerged in Baden in the spring of 2019. They were triggered by a polar-izing debate about growing anti-Semitism in Germany and the situation in Israel-Pales-tine, but also by the question of how the German host churches can engage with this area of conflict at the 2022 WCC assembly in Karlsruhe in a way that enables good, constructive conversations (and decisions). The responsible departments in the five re-gional churches have revised the texts many times in order to find, ”beyond entrenched attributions and positioning in both social and ecclesiastical spheres, a language that is as consensual as possible in the discourse on one of the most difficult areas of conflict: the relationship between Israel and Palestine and our relationship to both.” In addition, initial informal reactions from Jewish-Israeli, Palestinians, ecumenical, peace ethics per-spectives, as well as from the field of conflict research, were solicited and included in the editing process. Beyond the theses and their rationales, comments in the footnotes iden-tify some of the sensitive points in the debate.

Now that the church leaderships or councils of the five participating churches have adopted these Theses, they have been made available for free discourse. We hope that they can be more than just another example of posturing in this conflict; perhaps they can offer instead a helpful framework and useful language to aid in further debates, both within the EKD and in international ecumenical relations, through which something of the reconciling and unifying spirit of which the motto of the coming world assembly speaks becomes perceptible.

We greet you warmly from ”Rhine and Ruhr” 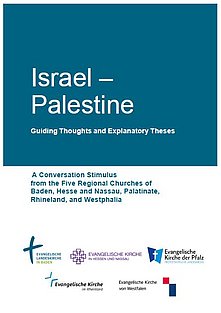 A Conversation Stimulus from the Five Regional Churches of Baden, Hesse and Nassau, Palatinate, Rhineland, and Westphalia