02.07.2015 (ROME) In a historic gathering in the Vatican earlier today, Pope Francis welcomed more than 250 Jewish and Christian leaders from the International Council of Christians and Jews. The Pope met with them to celebrate the fiftieth anniversary of the ground-breaking Vatican II declaration “Nostra Aetate,” which opened up new horizons in the Catholic Church’s approach to interfaith relations.

The participants in the papal audience today were delegates to the 2015 conference of the International Council of Christians and Jews, an umbrella organization which includes forty national Jewish-Christian dialogue organizations around the world.

Meeting with them in the Sala Clementina in the Apostolic Palace, the Pope spoke about the ancient roots of Rome’s Jewish community (the oldest in Western Europe, dating back to the second century B.C.E.). He pointed to the nearly 2000-year coexistence of Jews and Christians in Rome, and highlighted some of the ways in which that relationship has been transformed by Vatican II and the official Church documents which have flowed from it. “Nostra Aetate,” the Pope stressed, is “a definitive ‘yes’ to the Jewish roots of Christianity, and an irrevocable ‘no’ to anti-Semitism,” and he highlighted the work of Jewish-Christian reconciliation as an important fruit of the Holy Spirit’s work. “We are strangers no more, but friends, and brothers and sisters,” the Pope stressed, and “we confess one God, Creator of the universe and Lord of history. And he, in his infinite goodness and wisdom, always blesses our commitment to dialogue.” An important component of the Pope’s comments today was a series of comparisons between Christ and the Torah (God’s teaching). Both of these, the Pope noted, are ways in which God’s Word is made present. “This pattern of theological reflection on the relationship between Judaism and Christianity,” he said, “arises precisely from ‘Nostra Aetate’ (#4),” providing a solid basis which can be further developed.

At the beginning of the audience, the ICCJ’s President, Dr. Philip Cunningham, addressed Pope Francis, and introduced three symbolic gifts that the ICCJ offered him, each of which reflects an aspect of the 2015 conference’s theme of “the past, present and future of the Jewish-Christian relationship”: 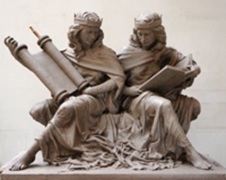 In their comments, both Pope Francis and Cunningham describe the future of Christian-Jewish relations as one of deepening friendship and study together. The presence of such a large and diverse group of Jews and Christians at the papal meeting is a very tangible testimony to the great progress of the last five decades, and to the hopeful future that lies ahead as “Nostra Aetate” turns 50 this October 28.