Mourning the death, at 97, of Rivka Dorfman, who with her husband, Ben-Zion, carried out extensive documentation of synagogues in Europe.

(JHE) — We mourn the death of Rivka Dorfman, who with her husband Ben-Zion spent years documenting the synagogues of Europe. She passed away in Jerusalem, aged 97.

Her husband, 98, survives her.

“It began in 1987,” Rivka Dorfman said in 2013. “We went on a three-week vacation in Italy and saw a synagogue which really caught our imagination. It was the first, and after that we searched for other synagogues.”

Already retirees, they traveled to Austria, Hungary, Croatia, northern Italy, Greece, and the Czech and Slovak Republics. In their research trips, they photographed 360 synagogues, amassing tens of thousands of images. Their book Synagogues Without Jews:  and the Communities That Built and Used Them was published by the Jewish Publication Society in 2000 and won a National Jewish Book Award.

“When villagers would protest that this was a waste of time because there was no longer a synagogue to be seen, only a structure that is now a factory or a derelict building, the couple would respond, ‘That’s exactly why we’re here,'” an article and interview with them in the Jerusalem Report stated in 2008.

In addition to their book and photographic documentation, they “transcribed tapes of locals who remembered the pre-WWII synagogues and the Jews who inhabited them, have given hundreds of lectures [and] produced a photographic exhibition at the Yad Vashem Holocaust Museum,” the article stated.

The Dorfmans’ material is particularly valuable as it mainly documents the period just before and after the fall of communism, before many of the disused synagogues they visited were restored and often transformed into museums or culture centers or revitalized as functioning synagogues.

In 2013, the Dorfmans, already in their 90s,  donated their archive of about 30,000 photographs — and more to Yad Vashem, where they form the Dorfman Archive of Synagogue Art and Architecture Collection.  (The transfer was made with funding from the Bob and Sheila Friedland Foundation.

“There are pictures, videos, audio and many documents about every city and town we studied. We have rooms filled with stuff. It’s good to be free of all of this,” the Dorfmans told YNET news at the time.

May her soul be bound up in the bond of life! 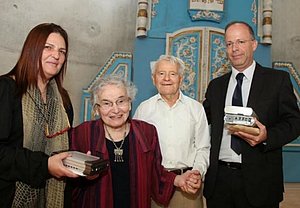 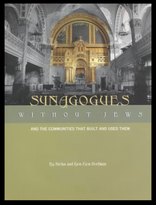 Left: Yad Vashem ceremony when the Dorfmas presented their archives
Right: Cover of the Dorfmans’ book