Some 150 participants – Christians, Muslims and Jews – representing 25 of 32 member countries, attended the annual conference of the International Council of Christians and Jews (ICCJ), which this year took place near Utrecht, the Netherlands.

Some 150 participants – Christians, Muslims and Jews – representing 25 of 32 member countries, attended the annual conference of the International Council of Christians and Jews (ICCJ), which this year took place near Utrecht, the Netherlands. Entitled Imagining the Other – Jews, Christians and Muslims in modernity – between self-determination and the imagined other, the event was cohosted by the ICCJ's Netherlands member, the Overlegorgaan van Joden en Christenen in Nederland (OJEC) and long established centres of learning, the Catholic Theological University of Utrecht and the Faculty of Theology of Utrecht University, and the Muslim community in the Netherlands. Leading Israeli as well as Muslim scholars were among the highly academic plenary lecturers, and workshop topics included 'Limits of Tolerance and thought”, “Women in conflict”, “Burning issues in the trilateral dialogue”, “Integration of Muslims in Europe”, “Confronting extremism and extremists in our communities” and “Addressing the different historical experiences in the relationship between state and religion.' The keynote address 'Ideals of universal humanity – the gap between the ideal and reality' was presented by former Netherlands Minister of Justice, Dr Ernst Hirsch-Ballin. The concluding addresses were presented by Cardinal William Keeler, USA and Chief Rabbi Bent  Melchior of Denmark. 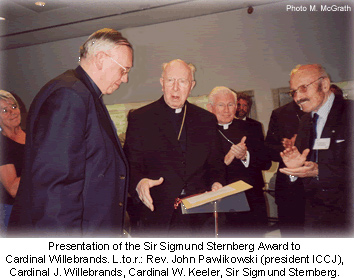 The ICCJ Annual Sir Sigmund Sternberg Award was presented by President, Rev. John Pawlikowski to Cardinal Johannes Willebrands, one of the pioneers of the new relations between the Catholic Church and the Jewish people. In his introductory remarks, Sir Sigmund Sternberg referred to the instrumental role played by Cardinal Willebrands in arranging the visit of Pope John Paul II to the synagogue in Rome, the first step which led the Pope from the threshold of the synagogue to the Western Wall of the Temple in Jerusalem. He said, 'It is in equal measure thanks to Cardinal Willebrands that relations between Rome and the non-Catholic churches have been advanced to the stage where that once abhorred word, ecumenism, is freely used and celebrated.'