A service held in Dresden on September 14, 2006, marked the first ordination of rabbis in Germany since the Hochschule für die Wissenschaft des Judentums (College of Jewish Studies) in Berlin was closed by the Nazis in 1942.

First Rabbis Ordained in Germany Since 1942

A service held in Dresden on September 14, 2006, marked the first ordination of rabbis in Germany since the Hochschule für die Wissenschaft des Judentums (College of Jewish Studies) in Berlin was closed by the Nazis in 1942. Three graduates of Abraham Geiger College, a rabbinical training school established at the University of Potsdam in 1999, were ordained in a ceremony held in Dresden's Neue Synagogue (New Synagogue). The college, which represents the Reform movement - also known as Liberal or Progressive Judaism - is named after the 19th century German Reform leader Rabbi Abraham Geiger. 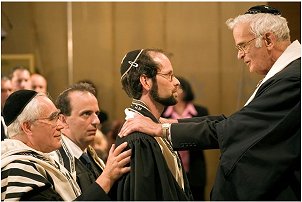 Rabbi Walter Jacob of Pittsburgh, Pennsylvania, U.S.A., a German émigré and the President of the college, presided over the ordination, which followed the candidates' graduation the previous day. Baroness Julia Neuberger, a British rabbi and member of the House of Lords, delivered the graduation address. Rabbi Walter Homolka, Principal of Geiger College, joined Rabbi Jacob in conducting the ordination. Greetings were also offered by Rabbi Dr. Alfred Gottschalk, Chancellor Emeritus of Hebrew Union College-Jewish Institute of Religion, U.S.A., and also a child survivor of the Holocaust.

The three ordinands include Daniel Alter, who will serve congregations in Delmenhorst and Oldenburg, Germany; Tomás Kučcera, who will serve Munich's Congregation Beth Shalom as well as the Progressive community in Prague; and Malcolm Matitiani, who will return to his homeland, South Africa, to serve as a rabbi at Temple Israel in Cape Town. All three candidates completed congregational internships as well as their academic studies.

Rabbi Andrew Goldstein of Northwood & Pinner Liberal Synagogue in Middlesex, U.K., commenting on the event in a sermon preached just after returning from the ordination ceremony, stated: "We were witnessing a miracle indeed in which the past glory of German Jewry was being linked to a new future."

From press releases and news reports